You are here:
Tree CareTree Trimming 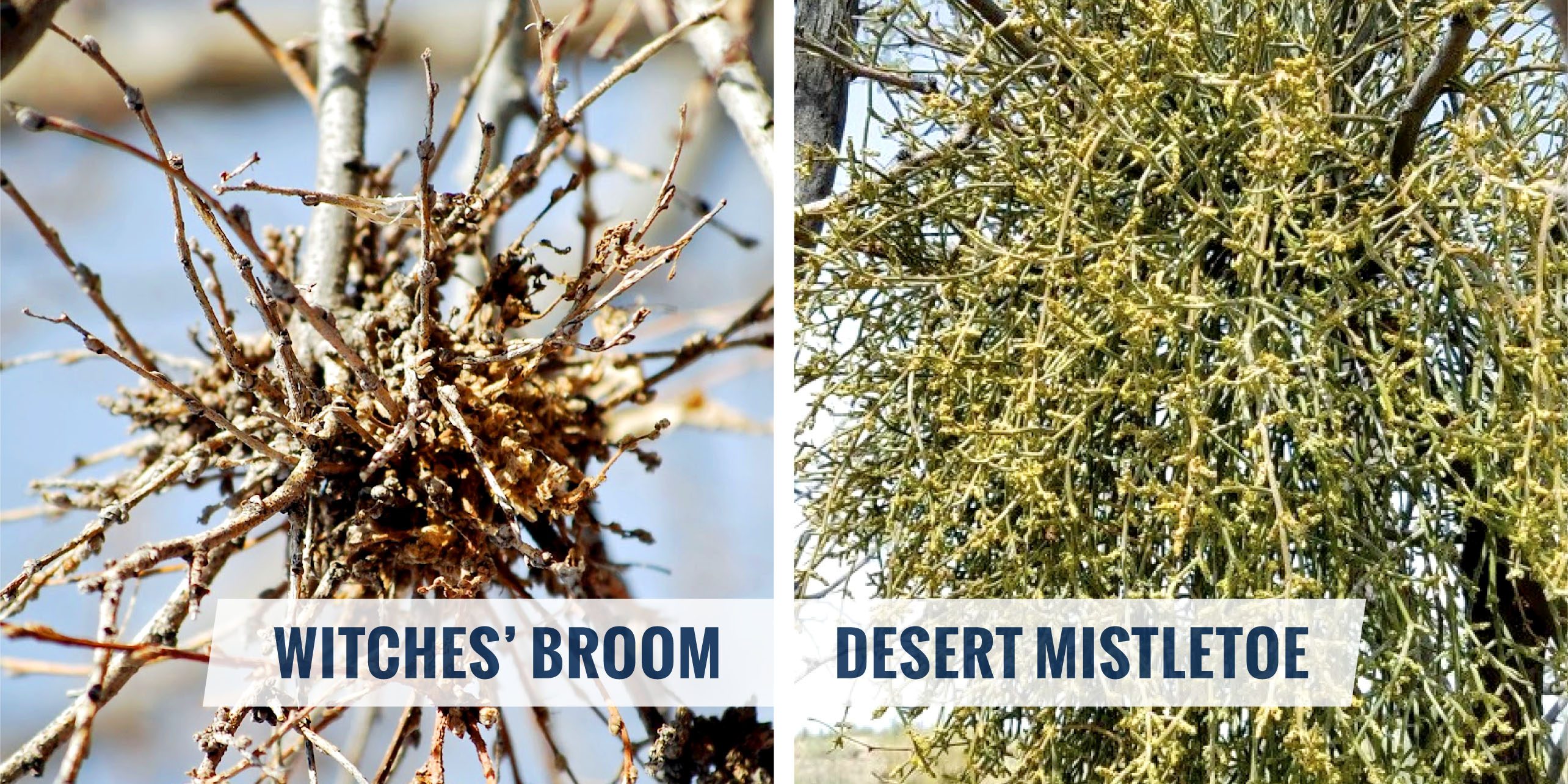 As you gaze upon the desert landscape, perhaps you have noticed the strange growths that often appear on trees. During the cold winter months, or dry summer, they become more noticeable as trees drop their leaves. These growths look like dense clusters of branches that can sometimes be mistaken for a large bird’s nest. But what are they, and what causes them? The term “Mistletoe” is commonly used but many are surprised to know that not all of these masses are in fact Mistletoe.

There is a very distinct difference between a Mistletoe, and what is actually a different type of growth known as a Witches’ Broom. One way to tell is by looking at where the growth has formed. Witches Broom is most often found by new growth near the tips of branches while mistletoe prefers more mature limbs. However, the biggest contrast between the two is what causes these conditions and how they function.

What is Witches’ Broom?

A Witches’ Broom is an abnormal growth of a plant’s own tissue. They typically occur in trees but can also be found on other woody plants like shrubs. On a cellular level, this deformity is caused when phytohormones interfere with the tree’s ability to regulate bud growth in a certain area. As a result, too many shoots continue to sprout from the same point. This ultimately forms the tangled overgrown clusters of Witches’ Broom.

Several organisms can be the catalyst for Witches’ Broom, including fungi, insects, mites, or viruses. Sometimes human interaction can introduce these harmful organisms when a tree is pruned improperly because the tree can be weakened and left more vulnerable. This is yet another reason to always hire a skilled arborist to care for your trees. The stress of Mistletoe or dwarf mistletoe infestation can trigger Witches Broom as well. That being said, it’s not uncommon for a tree to have both Mistletoe and Witches’ Broom growths. A genetic mutation in the tree can also cause the formation of Witches’ Broom.

Unlike Witches’ Broom, a Mistletoe is not created by the tree itself. Mistletoe is an actual parasite the steals nutrients and water from the host plant. When most of us hear the word Mistletoe we think of a romantic Christmas kiss. However, the type of Mistletoe we see in the southwest looks very different from the Mistletoe used elsewhere as decoration. The species growing here is known as Desert Mistletoe or Mesquite Mistletoe. Obvious in the name, the parasite prefers to grow in trees like Mesquite, Ironwood, Palo Verde, or Acacia.

Desert Mistletoe looks like a dense tangle of leafless stems hanging from a tree. They produce an abundance of small flowers and berries. Insects and particularly birds enjoy feasting on the nectar and fruit they yield. This is how Mistletoe is easily spread in the environment. Birds cannot digest the seeds in the berries and therefore transfer them from tree to tree via their droppings.

The Effect of Witches’ Broom and Mistletoe on Tree Health

Although unsightly, Witches Broom itself does not pose a serious threat to tree health. However, the underlying cause of Witches Broom can be something that is doing greater damage such as insects. It’s also important to note that these dense clusters can become very heavy on the tips of a tree branch. Limbs affected by Witches Broom are at increased risk for storm damage and structural failure due to the uneven weight distribution.

Mistletoe is fairly harmless as well, but the issue must be properly managed. Once it turns into a heavy infestation Mistletoe can start to deteriorate the host over time.  The tree structure can also become compromised if large masses are allowed to take root and mature in branch unions. But just because a tree has Mistletoe does not in any way mean that the tree is automatically going to die.

How to Remove Witches’ Broom and Mistletoe

If your tree has either of these conditions, the best solution is to contact an experienced tree care professional like Branching Out Tree Service. An arborist can safely remove areas of concern and make your tree beautiful again. Both Witches Broom and Mistletoe can easily be removed from the tree, but it’s important to follow best practices. If done incorrectly, pruning can create more issues for your tree by weakening it further.

Most of the time Witches Broom can be pruned away and depending on the original cause, it does not return. Mistletoe can be more of a nuisance because it takes root deep within the host. This means that even after removal, Mistletoe will continue to grow back because the roots of the parasite are still present. This condition will require repeat pruning to maintain the health and appearance of the tree. To prevent the spread of Mistletoe it’s also important to remove the clusters before they bloom and produce more seeds.

From the Same Category

Preparing Your Landscape and Trees for the Holidays
November 7, 2019

How to Protect Your Trees from Monsoon Storm Damage
July 16, 2019

Tree Service: Getting the Best Value for Your Money
May 6, 2019

How to Protect Your Citrus Tree in Cold Weather
April 12, 2019

Recent Articles
Get Your Free Estimate
Go to Top